Container for grapes entirely made from wood, shaped like an inverted truncated cone

The best and the worst of our past
have to be honoured
because they belong to us.
Look at the future with faith
and although these roots
are drenched with earth and mud,
flowers and fruits will be produced.

The wine cellar-museum is located in Torrenieri, in the Municipality of Montalcino, at the crossing of old state road no. 2 Cassia.
Numerous original implements are displayed in the cellar; they are generally very simple and date back to the XIX and XX century.
In the first decades of the 1900’s, new discoveries such as internal combustion engines, steam engines and electric power were introduced in agriculture. Most farming tools used until then thus became obsolete and were abandoned, destroyed or replaced by the farmers. The implements collected in this museum have almost miraculously been preserved from the sad fate that befell their counterparts. All the tools on display in the cellar-museum were once used by the local farmers. 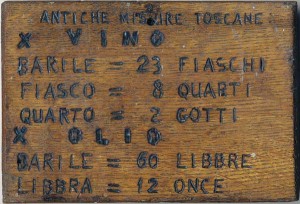 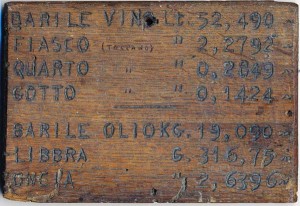