Abbadia Ardenga … and its origins 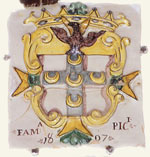 At the beginning the XIX century, the Piccolomini family began to sell olive oil and wine to travellers stopping over at the “Stage Station”.
This ceramic coat-of-arms identifies the estate and is still set into the wall at the entrance to the winery.

Ever since the Etruscan-Roman period, the buildings constituting today’s Abbadia Ardenga winery stood at the crossroads of major travel and trade routes. One of the first defence and lookout towers was built on the premises.

This was a place of transit of the goods exchanged between the Etruscan towns of Chiusi, Roselle, Arezzo and Volterra. Stone buildings were erected here as far back as the prehistoric age owing to the many water springs present in the area and considered so important as to be the object of bitter disputes.

In 990, Sigeric, Archbishop of Canterbury, stopped here on his way back from Rome to London.

Henry VII of the House of Luxembourg, King of Germany and Holy Roman Emperor also sojourned here, where he unexpectedly died.

In 1315, an Italian-German army headed straight to this castle from Pisa. The soldiers attacked and destroyed it, then ransacked and burned down all the dwellings in the vicinity, raped and killed their inhabitants, to avenge the death of their Emperor, whom they thought had been poisoned here. After many decades, marked by other battles and devastating epidemics, the castle was rebuilt and the area prospered once again.
Along the road towards Rome, new houses, shops, an inn and a church were built, along with a new castle to defend the mills and other activities that flourished on the banks of the River Asso. The village became a self- governing Commune under the jurisdiction of the Republic Siena and finally took on the name of Torrenieri.

The castle of the Black Tower (Torre Nera in Italian), property of the Piccolomini family, became a stopover point, with stables and an inn. It was known as the Stage Station of Poggio Torrenieri, but still looked like an old castle.

Around the year 1700, the Sienese historian Giovanni Antonio Pecci wrote:

“On the road from Siena to Rome,
on an easily accessible hill
cultivated with vines and olive trees,
close to the river Asso,
stands the small castle of Torrenieri.”

In the first half of the XIX century, the “Stage Station” was transferred to the far end of the village, in the same area where the railway station was planned to be built, while the buildings on the Hill were converted into a modern farmstead, with oil mill, winery, warehouses and dwellings for the workers.

Recent archaeological research based on archive data and excavations have made it possible to reconstruct, with a certain degree of certainty, the original structure of the ancient castle of the Black Tower.